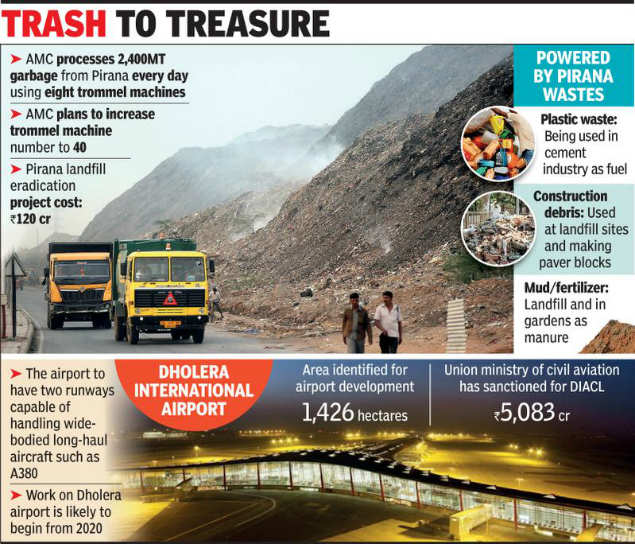 While the Ahmedabad Municipal Corporation (AMC) is trying to find ways to dispose of the waste segregated from the Pirana landfill, another government body is considering lifting a significant part of this waste. If all falls into place, AMC’s flattening of the Pirana trash mountain will also make for smooth aircraft landings at the proposed Dholera airport. Dholera International Airport Co. Ltd (DIACL) expressed interest in taking away the mud and construction debris extracted from Pirana, to level the patchy airport site.

DIACL has asked IIT Gandhinagar to present a feasibility report on whether the mixture of mud and construction debris could be used to level the airport site.

Amit Chavda, general manager of DIACL, said, “We are in talks with AMC to to use construction debris and mud from Pirana to level land at the airport site. “We need a massive quantity of debris to level the land in Dholera. We are exploring the possibility of using construction debris to level the earth there. We requested IIT Gandhinagar to carry out a feasibility study to figure out the economics of material transportation from Pirana to Dholera.

We are also figuring out the quantity AMC will be able to provide,” Chavda said.

A senior urban development department official said Dholera will need at least 70 lakh metric tonnes (MT) of material to level the airport site. He said construction of the airport can begin only after the land is levelled.

The AMC currently segregates and disposes of 2,400 metric tonnes of mixed waste from Pirana every day, using eight trommel machines. Around 65% of this waste is construction debris (35%) and mud (30%).

The AMC is currently using extracted construction debris at its paver block-making plant, while the mud is used to produce fertiliser. Mud is also being used in situ, to reclaim the Pirana site.

The National Green Tribunal recently ordered the AMC to get rid of the 53-metre-high Pirana mound in a year.
Source by :- https://timesofindia.indiatimes.com/city/ahmedabad/dholera-airport-could-rise-on-citys-waste/articleshow/70900197.cms