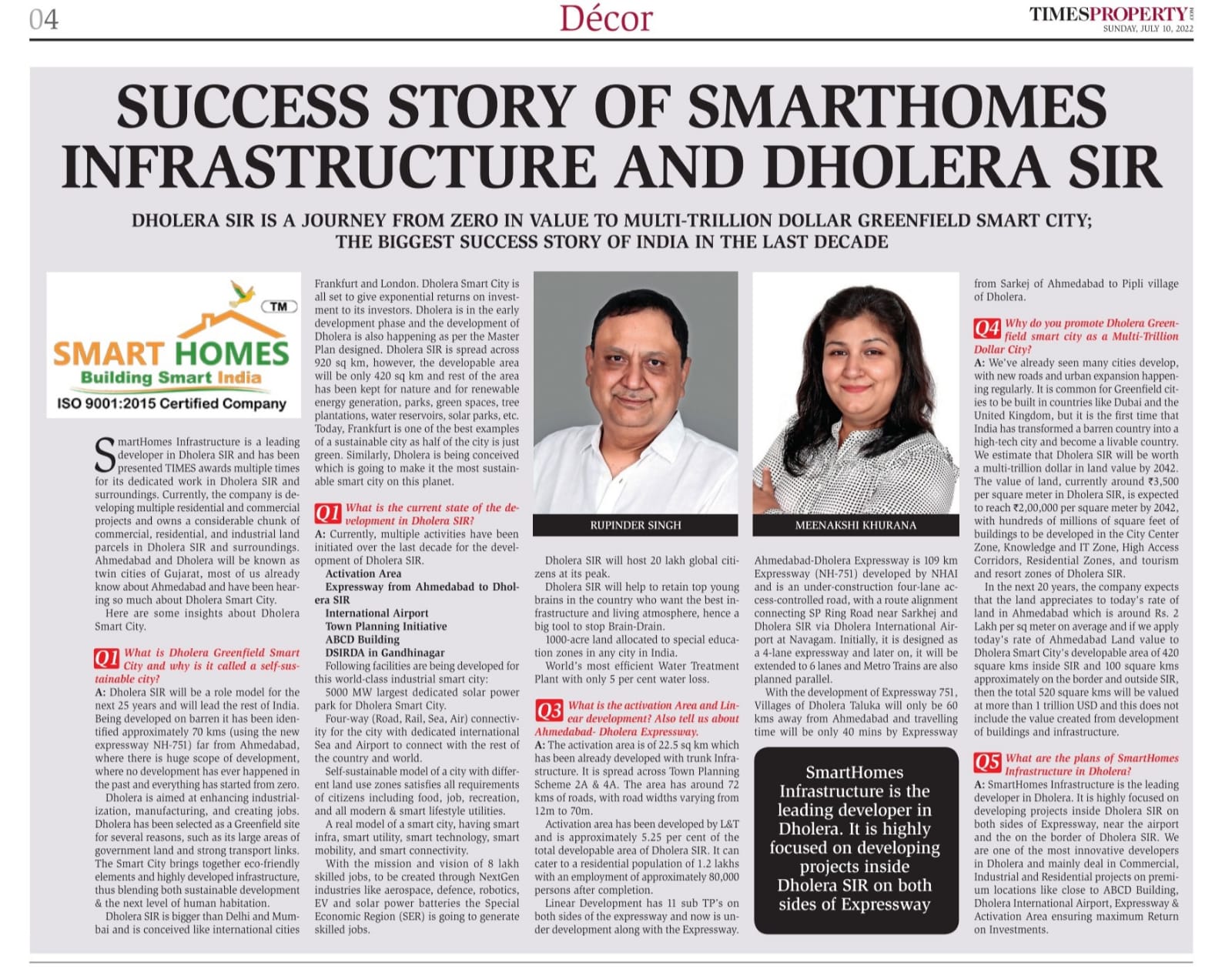 “Dholera SIR is a journey from Zero in value to Multi-Trillion Dollar Greenfield Smart City; the biggest success story of India in the last decade”.

Q1. What is Dholera Greenfield Smart City and why is it called a self-sustainable city?

Dholera SIR will be a role model for the next 25 years and will lead the rest of India. Being developed on barren it has been identified approximately 70 km (using the new expressway NH 751) far from Ahmedabad, where there is a huge scope of development, where no development has ever happened in the past and everything has started from zero.

Dholera is aimed at enhancing industrialization, manufacturing and creating jobs. Dholera has been selected as a Greenfield site for several reasons, such as its large areas of government land and strong transport links. The Smart City brings together eco-friendly elements and highly developed infrastructure, thus blending both sustainable development & the next level of human habitation.

Dholera SIR is Bigger than Delhi and Mumbai and is conceived like international cities Frankfurt and London. Dholera Smart City is all set to give exponential returns on investment to its investors. At the present moment, Dholera is in the early development phase and the development of Dholera is also happening as per the Master Plan designed.

Dholera SIR is spread across 920 sq km, however, the developable area will be only 420 sq km and rest of the area has been kept for nature and for renewable energy generation, parks, green spaces, and tree plantations, water reservoirs, solar parks, etc. Today Frankfurt is one of the best examples of a sustainable city as half of the city is just green. Similarly, Dholera is being conceived which is going to make it the most sustainable smart city on this planet.

Q2. What is the current state of the development in Dholera SIR?

Currently, multiple activities have been initiated over the last decade for the development of Dholera SIR.

Following facilities are being developed for this world-class industrial smart city:


Q3. What is the activation Area and Linear development? Also, tell us about Ahmedabad- Dholera Expressway.

The activation area is 22.5 sq km which has been already developed with trunk Infrastructure. It is spread across Town Planning Scheme 2A & 4A. The area has around 72 km of roads, with road widths varying from 12m to 70m.

The activation area has been developed by L&T and is approximately 5.25% of the total developable area of Dholera SIR. It can cater to a residential population of 1.2 lakhs with an employment of approximately 80,000 persons after completion.

Linear Development has 11 sub-TPs on both sides of the expressway and now is under development along with the Expressway. Ahmedabad-Dholera Expressway is a 109 km Expressway (NH-751) developed by NHAI and is an under-construction four-lane access-controlled road, with a route alignment connecting SP Ring Road near Sarkhej and Dholera SIR via Dholera International Airport at Navagam. Initially, it is designed as a 4-lane expressway and later on, it will be extended to 6 lanes, and Metro Trains are also planned parallel.

With the development of Expressway 751, the Villages of Dholera Taluka will only be 60 km away from Ahmedabad, and traveling time will be only 40 mins by Expressway from Sarkej of Ahmedabad to Pipli village of Dholera.

Q4. Why do you promote Dholera Greenfield smart city as a Multi-Trillion Dollar City?

We've already seen many cities develop, with new roads and urban expansion happening regularly. It is common for Greenfield cities to be built in countries like Dubai and the United Kingdom, but it is the first time that India has transformed a barren country into a high-tech city and become a livable country.

We estimate that Dholera SIR will be worth multi-trillion dollars in land value by 2042. The value of land, currently around Rs. 3,500 per square meter in Dholera SIR, is expected to reach Rs 2,00,000 per square meter by 2042, with hundreds of millions of square feet of buildings to be developed in the City Center Zone, Knowledge & IT Zone, High Access Corridors, Residential Zones, and tourism & resort zones of Dholera SIR.

In the next 20 years, the company expects that the land appreciates to today's rate of land in Ahmedabad which is around Rs. 2 Lakh per sq meter on average and if we apply today's rate of Ahmedabad Land value to Dholera Smart City's developable area of 420 square KMS inside SIR and 100 square KMS approx on the border and outside SIR, then the total 520 square KMS will be valued at more than 1 trillion USD and this does not include the value created from the development of buildings and infrastructure.

Q5. What are the plans of SmartHomes Infrastructure in Dholera?

SmartHomes Infrastructure is the leading developer in Dholera. It is highly focused on developing projects inside Dholera SIR on both sides of Expressway, near the airport, and on the border of Dholera SIR. We are one of the most innovative developers in Dholera and mainly deal in Commercial, Industrial and Residential projects in premium locations like close to ABCD Building, Dholera International Airport, Expressway & Activation Area ensuring maximum Return on Investments.