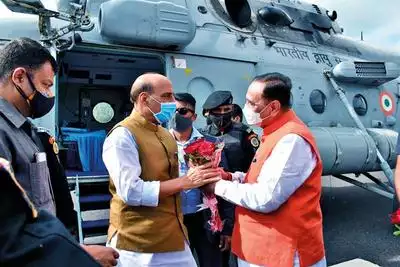 The next Defence Expo will be hosted by Gujarat in 2022. This was announced by chief minister vijay Rupani in Kevadia on Thursday after the Gujarat government signed an MoU to this effect with ministry of defence in presence of defence minister Rajnath Singh.

Rupani said that the 4-day expo will be held between March 10 and 13 in Gandhinagar next year. While the seminars will be held at Mahatma Mandir, the helipad exhibition centre will serve as the exhibition site for the expo.

Singh said that plans are afoot to host even the defence ministers’ conclave in the state.

Singh and Rupani were in Kevadia to attend a meeting of Gujarat BJP’s state executive that was presided over by state unit chief C R Paatil. Along with the key leaders all the party MLAs, MPs, members of executive committee, party’s state office-bearers and presidents of district and city units attended the meet.

This is for the first time the Gujarat BJP has organised a ‘paperless state executive’ meeting, wherein invitees have been given tablets with all the required information and links related to the event.