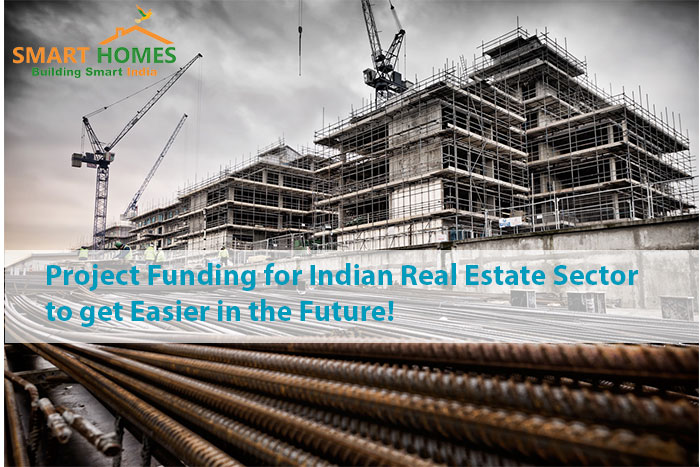 Project Funding for Indian Real Estate Sector to get Easier in the Future!

Up until now real estate project funding in India involved unfriendly norms, government restrictions, approval issues and above all resistance from conservative DNA of Indian banks to fund a project - Certainly not at all a cakewalk for Real estate developers in India till some time ago!
However, the winds seem to have been changing direction with the new government at center who immediately understood that the growth of infrastructure sector was imperative for the growth of overall economy and employment opportunities in India. Currently growing at the rate of 12-13%, the real estate sector is targeted to grow at 18-20% in times ahead therefore leading to changes a series of norms and regulations to facilitate such growth.
Project funding regulations have witnessed some friendly steps which have eased the erstwhile dreadful nightmare for most of the developers. We are listing down six broad measures that have paved way for such changes:-
1. Ease in FDI norms– The numbers of FDI inflow in real estate sector were constantly seen diminishing from the years 2011-2013 with it going down from USD 3.1 billion to USD 1.2 billion annually. This was mainly due to stringent policy and non-friendly framework thus causing a great worry for the developers in terms of project funding. The government recently modified the FDI norms to boost the inflow by a great deal. While allowing 100% FDI investment in this sector, It relaxed the minimum capital requirement from USD 10 million to USD 5 million. Besides the minimum floor area requirements was reduced from the earlier 50,000 square meters to 20,000 square meters allowing them to diversify their risk by investing in several smaller projects instead of one big one. The lock in period was also relaxed and FDI’s can now exit a project after 3 years of the last investment once the trunk infrastructure is prepared. It can also transfer its stake to another non- resident company before completion of the project. Such positive changes are bound to enhance FDI investment making financing options more readily and easily available. More and More Foreign Investment Institutions are now looking to invest in Indian Real estate. Hopefully, the second budget from the new government will relax the norms further so that Foreign Investors get more confident about investing in Indian Real Estate.
2. Lowering down of rates– The bank Interest & repo rates have been reduced by RBI and the government creating a positive influence in the real estate financing. Repo rate is the rate at which RBI lends money to the bank which has been lowered down by 25 basis points to 7.75 percent thus enhancing liquidity into the system and signaling increased lending by banks. There are few more rate cuts that can be expected to be seen in this financial year. This will result in reducing the cost of capital for the developers. And this will result in reduced interest rates for home buyers availing finance to purchase their dream homes. This will further help developers to have improved liquidity.
3. Long term funding instruments by banks– It was a tedious process for builders and construction houses to get loans from banks for the real estate funding purpose leaving them with no option but to approach alternate options at a higher interest rates thus raising the cost of construction. The tenure for which loan was available was far less than the gestation period of property which easily lasts for 7-8 years. RBI has thus announced provision for banks to issue long term infrastructure bonds with a term of 7 years. Such bonds are also exempted from statutory ratios such as CRR and SLR to enhance liquidity for funding purposes.
4. Housing for All by 2022– Government's vision "Affordable housing for all by 2022" is acting as a catalyst to growth in real estate sector opening up the doors to easier norms and reforms leading to easier financing options. The rising urbanization and ever increasing population demands creation of 11 crores new residential units by the year 2022. In additions its plan to develop the DMIC corridor and 100 smart cities is fueling the sector further. This is thus making government take extraordinary efforts in terms of getting cheaper and easier financing available both to borrowers and lenders leading towards realization of this dream.
5. Increased allocation in budget- The government has laid greater emphasis on real estate financing and development while allocating budgets for 2014-15. It has announced Rs. 8,000 crores to be embarked for rural housing while Rs. 7,060 crores has been allocated towards development of 100 smart cities. A hefty amount of Rs. 50,000 crores has been announced towards development of rural housing and Rs. 4,000 crores for low cost housing alone. The real estate experts have applauded the budget for allocations towards the sector along with making way for foreign investments easier.
6. Changes in REIT's framework– REIT' s or Real Estate Investment Trusts are SEBI approved platform through which smaller investors can invest in bigger projects which are commercially profitable by owning a part of that project. The establishment of such trust was approved by SEBI in August 2014 opening a new venue for real estate financing and investment enhancing liquidity in the otherwise cash strapped sector. In India it will invest mainly in Hotels, office complexes, IT parks malls and healthcare centers thus easing diversification of real estate portfolio for investors of all types and making it a realistic option for layman investors and professionals alike.
We are expecting further relaxation in Interest Rates, FDI norms for project funding, approval guidelines for projects and flexibility in several norms in the near future. Things have started looking positive here on and we will see a radical change in how the funding of real estate projects in India is perceived by developers due to the reforms. Such transformations were the most requisite ones for India to prosper and are therefore this is welcomed with open arms.
Rera Projects