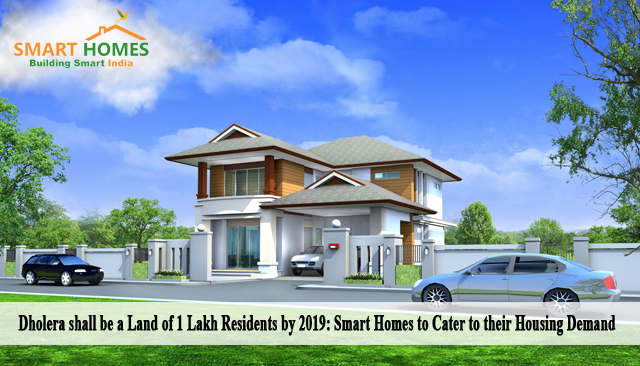 Dholera shall be a Land of 1 Lakh Residents by 2019: Smart Homes to Cater to their Housing Demand

Dholera, the city of hope against the persistent problem of rapid urbanization shall soon house 1 lakh people. As per Ajay Bhadoo, Managing Director, Dholera SIR, Dholera shall be ready with initial industrial units and required infrastructure to host such population by 2019.
Such sudden surge of population shall cause a spike in housing demand, much of which shall be catered by the leading real estate brand Smart Homes. Smart Homes shall develop as many as 20,000 value homes in Dholera between the period 2016 and 2025 which shall be instrumental in catering to the initial population outburst in the city. The company aspires to build 1 lakh homes in the 100 smart cities of India in several phases.
Work is being conducted at a rapid pace in Dholera as L&T, the IT giant has been appointed for construction of roads and services in the smart city. The firm has bagged an EPC contract for Rs. 1,734.04 Crores during the first Board meeting of the Dholera Industrial City Development Ltd. (DICDL) which was held on 30th January this year. It shall construct major and minor roads stretching across 72 kilometers in the city. The task of developing the ABCD complex has been given to Cube Constructions Engineering Ltd. The firm has been awarded a contract worth Rs. 72.31 Crore for the same.
Wipro Technologies has also been appointed recently for deployment of ICT in the smart city, the spine element without which Dholera cannot be developed as desired. Various projects shall be undertaken by Wipro to make the city smarter and more efficient. Few of them include development of integrated operation centre, e-governance, data centre, city wide network and city dash boards.
It is estimated that Dholera shall give rise to 8 lakh new jobs through its manufacturing and industrial base. This in turn shall pull people in the city and the total population of Dholera shall touch 2 million by 2040. Such population shall give rise to enormous residential housing need which is estimated at 5 lakh new units by the authorities. Such figures have thus made about 30 real estate developers jump into the market of Dholera to make the most of the impending opportunity.
Smart Homes, unlike other developers believes in delivering superior quality homes with unmatched infrastructure and excellent amenities at a reasonable cost. They aspire to cater to all segments of the society and thus are developing housing solutions for all income levels.
Whether you are looking for a luxury living option or searching one within tight budgets, Smart Homes shall have it all for you.
Rera Projects