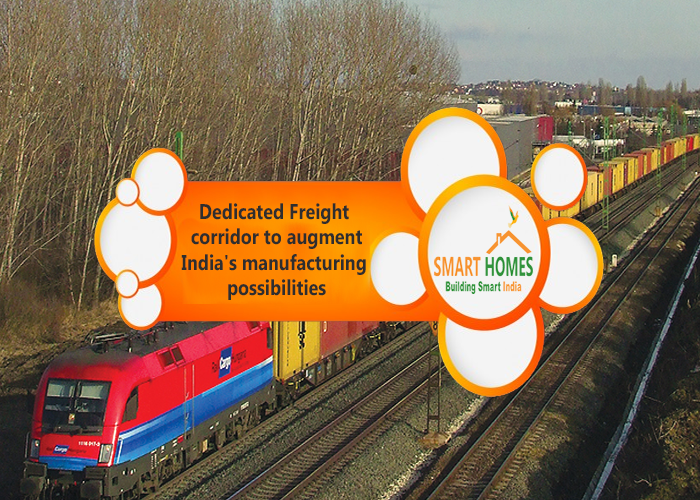 The high speed Dedicated Freight Corridor as approved by Government of India, shall be built along 1483 kilometers with its two ends at Jawaharlal Nehru Port near Mumbai and Dadri in NCR. The corridor shall pass through the states of Uttar Pradesh, National Capital Region of Delhi, Haryana, Rajasthan, Gujarat and Maharashtra. The DFC has been planned in a manner that it shall enable high speed transit for25 tonsHigh Axle Load Wagons of Double Stacked Container Trains that shall be supported by high power locomotives.
DMIC shall be developed on both sides of the DFC and pass through Uttar Pradesh, Haryana, Rajasthan, Gujarat, Maharashtra and Madhya Pradesh. 150 -200 Km stretch has been identified on either sides of the DFC for such purposes. DMIC with support from the DFC is envisaged to accelerate service and manufacturing industry in India and eventually help it develop as a global trading and manufacturing hub. It shall also contribute heavily to the ‘Make in India’ mission launched by the central government. In order to ensure the success of the corridor, DMIC master plan also includes development of requisite feeder rail, road connectivity to hinterland and markets and select ports along western coast.
DMIDC shall be the governing body for development of the project. The authority aims to be of assistance to the state government and other central government agencies and shall be responsible for project development for various townships, investment regions, industrial areas, economic regions and industrial nodes. Additionally DMIDC shall also play a crucial role in planning and implementation of such projects through mobilizing finances and resources for the same. It shall also be instrumental in advising the central and state government and other project stake holders for issues related to financing of infrastructural projects preceded by thorough study and research on the subject matter.
Strategic locations in form of Investment Region (IRs) and Industrial Areas (IAs) have been identified on the influence area of the corridor which shall foster investment friendly and transparent regimes. These locations are targeted to provide for business friendly environment and shall thus be developed as sustainable industrial townships with top class infrastructure, best possible amenities and enhanced connectivity.
DMIC shall have 24 investment nodes along the corridor which shall act as a catalyst to its economic progress. These 24 nodes shall be divided into 11 Investment Regions and 13 Industrial Areas with 7 Investment Region and 6 Industrial Areas to be developed in phase 1 (2008-12) and the rest to be developed in the following four years. These regions have been identified by the state governments and other concerned authorities after much contemplation.
An Investment Region has been defined as one which shall have a minimum area of 20,000 hectares (200 square kilometers). Seven of them to be developed in Phase 1 are:-
An Industrial Area has been defined as one which shall have a minimum area of 10,000 hectares (100 square kilometers). Six of them to be developed in Phase 1 are:-
Rera Projects