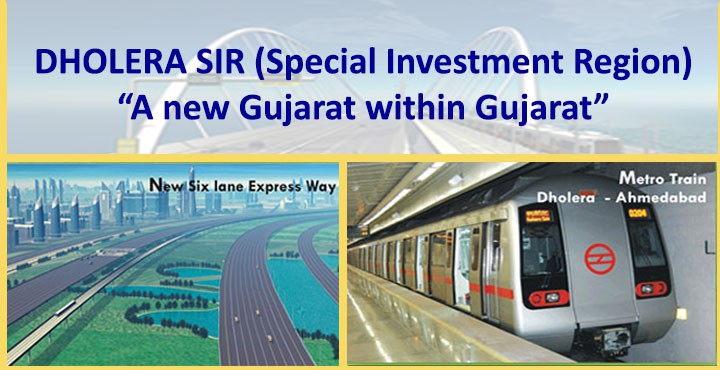 It is the first smart city amongst the seven nodes to be developed under Phase-I of the Delhi Mumbai Industrial Corridor and boasts of its largeness in terms of the area that it shall cover – A whooping 920 square kilometer! However the implementation plan of the project has been divided into phases and the Phase I of development shall be done in an area of 153 square kilometers. An activation area has also been defined which consists of 22.5 square kilometers and it is in this area that the initial and actual work shall commence. This area has a Floor space Index of 5 which permits it to have buildings as high as 150 meters constructed on it. The activation area shall be filled with multiple zones that shall truly bring out the smartness of the smart city. These zones shall be industrial zones, knowledge and IT zone, solar park, residential zone, high access corridor, logistics, city centre, agriculture zone, village buffer, and tourism-resorts.

Dholera, an erstwhile port in the Gulf of Khambhat which is no longer operational is all set for a transformation – one that shall change the small city with lack of opportunities into one steaming with prospects. The difference is already being felt by the current residents and businessman of Dholera – The decision to convert it to a smart city has created a manifold increase in their business.

Nirmalsinh Chudasma, a 45 year old farmer has already started reaping the benefits. He owns a 900 vigah land (21.36 lakh square meters) in Dholera and has been harvesting grams, cotton and wheat there. Of the 900 vigah, 400 were unproductive due to salinity issue thus leaving only 500 vigahs of productive land to harvest crops. Earlier he used to earn Rs. 3,000- 3,500 per vigah from this land per month which amounts to Rs. 1,50,000 approximately. Now this land has become a golden one and the prices have plummeted to Rs. 1 lakh – An unimaginable rise in the destiny of Chudasma.

Chudasma has now hired laborers who tills his land and harvest on his behalf while he comfortably runs a real estate business from a sophisticated office and is all praise for the government of Gandhinagar who brought a phenomenal change in his life and in lives of many like him.

Let us now take a look at how Dholera has fared so far in terms of progress and development to become a smart and sustainable Greenfield industrial city. It has been notified under the National Investment and Manufacturing Zone policy and has successfully obtained environmental clearance way back in August 2014.However as per the “The Indian Express” team, no visible sign of construction could be seen in the activation area during their last visit. Nonetheless there has been a steep rise in the land deals over the last six months as per the sub registrar RG Thakur. As per him, 742 deals have already been signed and officially registered at their office. Most of them have been registered under Town Planning 1 and Town Planning 2 schemes that fall under residential and industrial zone of Town planning. It has also been noted that most of the buyers belong to the cities of Mumbai, Delhi, Ahmedabad and Surat. The project is currently being implemented by Gujarat Infrastructure and development board (GIDB). Ajay Bhadoo, who is currently the CEO of GIDB and also performs dual role of being secretary to the Gujarat Chief Minister Anandiben Patel had said that the work on both the above stated town planning schemes should commenceby May-June 2015. Rs. 3,000 crore has been sanctioned by the Government of India towards development of the six town planning schemes decided for Dholera. The sanction was announced just before the Pravasi Bharatiya Divas and the Vibrant Gujarat Summit.

Dholera, a city located 100 kilometers from the city of Ahmedabad has opened up gates for the middle class strata of the society who are looking at relocating and seeking employment or business opportunities. It is also an ideal project for global investors seeking to invest large sum of money. However they shall only get attracted and invest once the basic infrastructure of the smart city is created. This should take about five year from now as per Nirav Kothary, head (industrial real-estate), JLL. He had personally taken interest in the development of Dholera and had visited the site many times.

The massive smart city is estimated to employ over 8 lakh people by the year 2042 and act as a supporting pillar to the two million population of Ahmedabad. It has raised many hopes and people are hoping for timely execution of development plans. It is now upto the authorities on how soon they shall develop the first and the biggest smart city of India.