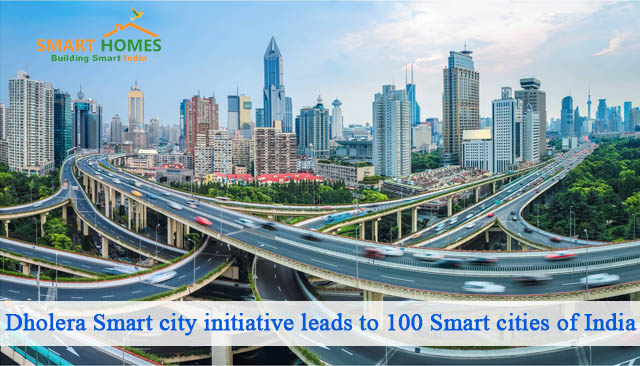 Dholera SIR, conceptualized as the first smart city of India by Prime Minister Mr. Narendra Modi, is being followed by another 100 smart cities.
Of the 98 smart cities announced by the Ministry of Urban Development, six smart cities shall be developed in Gujarat. These cities are Vadodara, Gandhinagar, Ahmedabad, Surat, Rajkot and Dahod. Along with Dholera, the count of smart cities in Gujarat accumulates to seven.
Dholera is the first Special Investment Region being developed in India after establishment of the SIR Act.It is located near Dhanduka village in the Gulf of Khambhat of the Ahmedabad district of Gujarat. The brainchild of Mr. Modi, the city was envisioned as a smart city long before he became the Prime Minister of India.
Spread across 920 Sq. Km, the city is a special node on the DMIC corridor and shall witness massive manufacturing and trading activities due to the same. The project is far ahead than any other smart city and is the fastest developing city of India. Much of its pace is a contribution from the central government which has sanctioned Rs. 2,784.83 crores towards development of its trunk infrastructure components which is expected to get completed by 2018-19.
The trunk infrastructure is being developed over 22.5 square kilometer area, also known as the activation area and the components shall include construction of roads, water and sewage treatment plants, Common effluent treatment plant and other services. The trunk infrastructure development is expected to act as a catalyst in attracting funds and investments from alternate sources. Balance funding requirements for the project shall be met through PPP model and foreign funding. With the relaxation in the FDI norms and removal of the minimum capital requirement and minimum area constraint, massive FDI inflow can also be expected in the region.
An excellent network is being set up to connect Dholera to local and global cities. This includes a 6 lane expressway that shall connect it to important cities such as Ahmedabad and Vadodara, high speed metro and extended railway route. An international airport, 20 kilometers from Dholera has also been approved by the Airport Authority of India and shall be instrumental in connecting the city to the world. Such enhanced connectivity shall play a vital role in developing it as a global manufacturing and trading hub.
Extensive usage of Information and Communication technology shall be adapted across the smart city. Real time monitoring and usage of data shall build in cost efficiency in the system. The city shall promote green building concept and shall have huge open spaces and parks to provide a health and sustainable environment to its residents.
A city of opportunities is in the making; the low cost of land combined with the potential ahead makes it a wonderful investment proposition that shall reap exponential returns.
About: Vijay K Wali is the Director, Operations with Smart Homes Infrastructure (P) Ltd. Smart Homes Infrastructure is a part of Smart infrastructure Pte Ltd.
Smart Homes is a professionally managed young organization that specializes in affordable Group Housing and Town Planning Projects in India and plans to build more than 100,000 homes in next decade. Smart Homes has a Team that has over 200 man years of experience in development of apartments in group housing projects and the team has the experience of selling more than 80 million square feet of housing projects across India.
Rera Projects